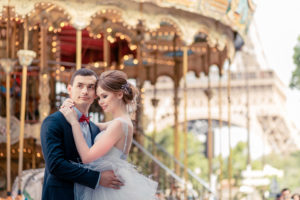 As featured on French wedding style

This is a story of childhood love between Anastasiya & Konstantsin, though young at age, they knew it was love at first site, however around the age of 16 the couple had a quarrel that resulted in them going their separate ways. Although the two separated and still not speaking it was faith that kept them close as they were enrolled in the same high school and university which allowed them to still see each other in passing on the campus. As their lives continued to develop they found themselves in relationships that was still missing something; that feeling lead Anastasiya to finally break the silence and call Konstantsin on his 21st birthday. During their conversation Konstantsin found out that Anastasiya was going to move to another country. With further conversations between the two, they both made a decision to leave the persons they were currently involved with to start a new life together. It has been 3 beautiful years and going strong.

They wanted to get married in Paris and associate the love and beauty of this city with their life and the love they share.

Once the decision was made that Paris would be the place to marry, they sought out and found one of the best known Wedding Planners in Paris, Inga from “CTH Events Paris.” One of Inga’s best suggestions that captured the Bride and Groom was to combine the pleasures of getting married in a beautiful French castle with a Paris photo shoot and to have their wedding dinner in a mythical restaurant.

The wedding took place at the Pavilion de Musique, a luxurious castle near Paris, where the couple and their guest enjoyed immense parkland, magnificent Seine and the city itself. The guest was enchanted with the luxurious interior of the chateau, marble fixtures, old chandeliers, ceilings with paintings and gilded walls. This made the two lovebirds feel they were having a real French wedding.

They chose to celebrate the wedding after a photo session in Paris, at a Parisian restaurant by the name of Laperouse. This marvelous venue was established in 1766 facing the Seine and the lle de la Cite with historical interior and an astonishing river view rich in paintings and soft lighting. Laperouse, was awarded three stars by the Michelin Guide in 1951, one of the first restaurants of the modern Michelin era to receive such an honor. The sounds of violin and piano have cheered their wedding day.

This beautiful wedding was organized in the purest tradition of Parisian elegance. This wedding is an example of how to enjoy every moment of your wedding day and surprise guests with what Paris has to offer.

Your elopement to Paris

Made with Love in Paris